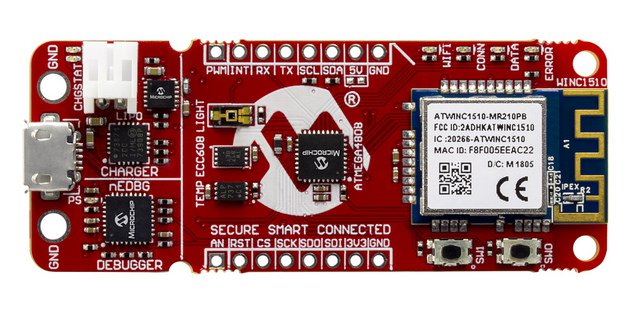 Microchip IoT development board aims to simplify the development of IoT devices, making the process faster and less exhaustive.

First, there were Wi-Fi SoCs and microcontrollers that allowed engineers to quickly create Internet-enabled products. It was not long before the term “IoT” was adopted and all manufacturers rushed to turn virtually anything and everything into an IoT product. However, this rapid race for production has created problems for industry and for customers.
One of the main problems has been security actions not implemented, which means hackers can easily hack into devices and use them maliciously. This is a constant struggle as printers, coolers and other IoT devices are still being recruited for large-scale DDoS attacks.
Second, without an industrial agreement on standards, most companies produced their own protocols for data transmission, which meant that one device of one company could not easily be used with other services. Solving these problems will be vital to the future of the IoT industry.

AVR-IoT WG development board is a fully integrated IoT prototyping solution that allows you to create IoT projects within minutes. The board contains a hardware kit, including battery charging circuit, debugger, multiple sensors and GPIO.
At the heart of the AVR-IoT WG is the ATMEGA4808, which is an 8-bit microcontroller with a clock rate of 20MHz, up to 48KB of Flash, 6KB of SRAM and 256 bytes of EEPROM.
For Wi-Fi connectivity, the card contains a low power 2.4GHz b / g / n ATWINC1500 module that is connected via SPI and can be used with various network services including DHCP, DNS, TCP, UDP, HTTP and HTTPS.
Security is a major concern in the field of IoT, so AVR-IoT WG development board also integrates an ATECC608A cryptographic coprocessor that helps to offload cryptographic functions from the main processor. Integrated to the ATECC608A is storage protected for up to 16 elements (keys, certificates or data), hardware support for asymmetric signal, key verification and arrangement, hardware support for symmetric algorithms (SHA-256 and AES-128), support secure boot, guaranteed 72-bit exclusive serial number and integrated random number generator.

AVR-IoT has an integrated debugger, the nEDBG, which acts as a virtual communication port, a debugger, and a data gateway. But the most important feature of nEDBG is undoubtedly the appearance of a mass storage device that allows drag-and-drop programming. This means that a compiled program can simply be dragged into the AVR-IoT WG as if it were a removable device such as a USB flash drive.

According to Microchip, the AVR-IoT WG integrates an MCP381-based charger circuit to connect external lithium-ion batteries, which eliminates the need for any additional circuitry. This allows the AVR-IoT WG to be integrated into most consumer prototype scenarios, without the need to design power control circuits.
The AVR-IoT WG card also features two LEDs for power indication, where the red LED indicates battery charge and low voltage and the green LED indicates charging is complete.

The board can be used with Google Cloud IoT, which incorporates authentication solutions, including using reliable hardware root, simple code implementation based on the JSON Web Token. It has no reliance on TLS thanks to the JWT architecture. Another useful feature of Google Cloud IoT is the creation of smart and secure nodes.
To learn more about the Microchip news and the IoT world, follow our social networks: Facebook, Instagram and Linkedin.

This website uses cookies to improve your experience while you navigate through the website. Out of these, the cookies that are categorized as necessary are stored on your browser as they are essential for the working of basic functionalities of the website. We also use third-party cookies that help us analyze and understand how you use this website. These cookies will be stored in your browser only with your consent. You also have the option to opt-out of these cookies. But opting out of some of these cookies may affect your browsing experience.
SAVE & ACCEPT